Tyra Meek had stired the internet with her lovely ‘No Brazier Day’ photos which has caused many men admiring and discussing her on all social media platform.

The young talent has responded to her admirers to focus on her talent and download her songs to support her than to admire her body and beauty.

Speaking to eagleeyegh.online, the “Demon” hitmaker has maintain that, Ghanaians should support her talent instead of her body. 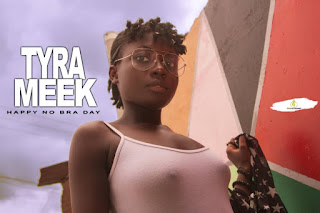 “I only demonstrated and patronised ‘No Brazier Day’ by dragging off the brazier from my chest to take some pictures for the campaign against breast cancer. I was shocked with the response from my followers on social media where majority of them were showing an admiration of my pin point nipples. I never plan seducing anyone, I just took a picture to support a campaign. Its good they admired my beauty and body but I will plead them more to download my songs and support my talent and I promise to make them proud by entertaining them with good music.” she has told  eagleeyegh.online when reacting to a question of how she felt with the kind of responds she had had after her picture had gone viral on social media.

Paracetamol Is The Only Drug I Do. - Efya